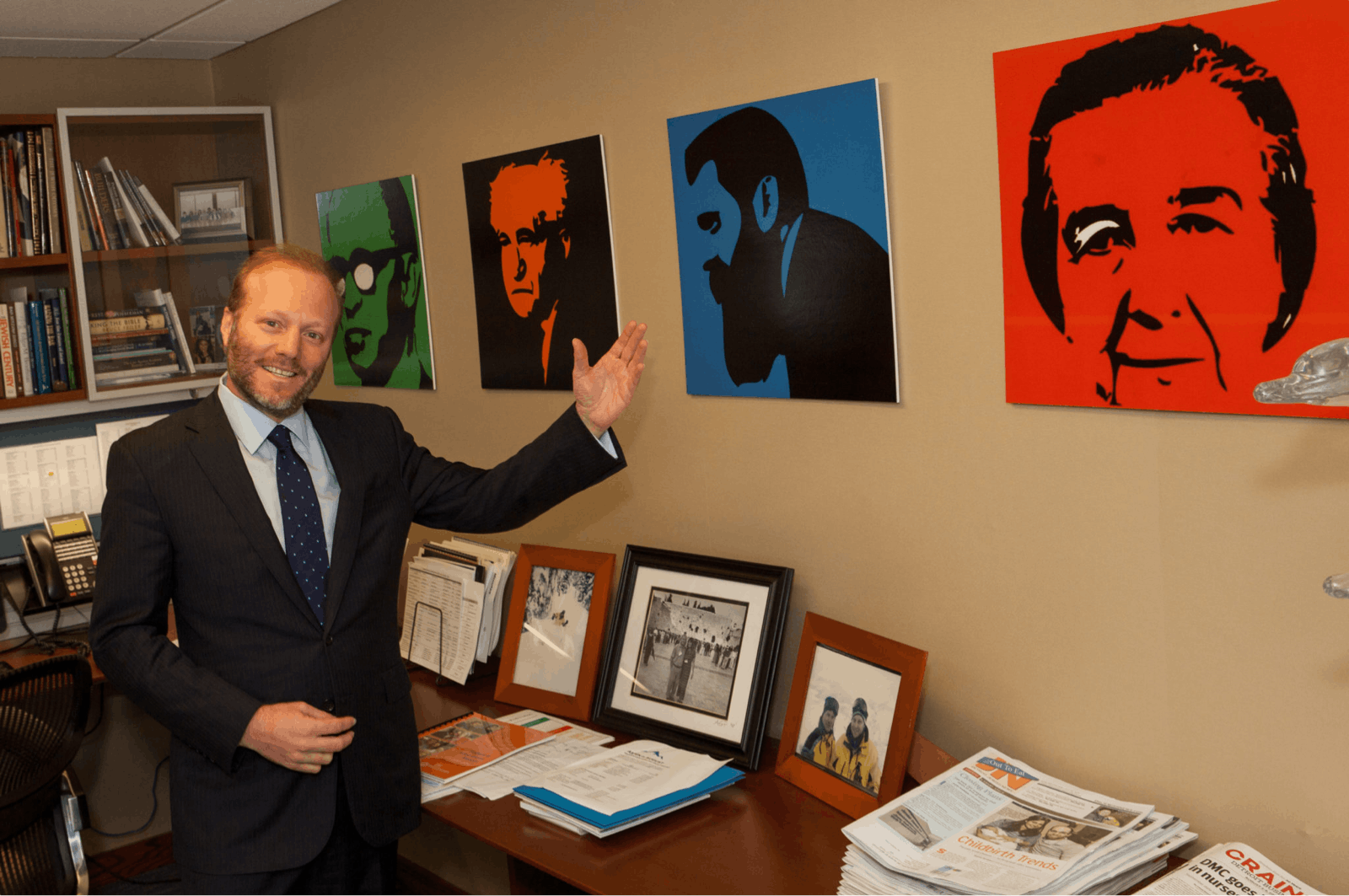 We’re thrilled to welcome Scott Kaufman as the new chair of the board of Leading Edge. He assumed that position as of January 1, 2020. (You can read our exit interview with his predecessor Sandy Cardin here.)

For 11 years, Scott served as CEO of the Jewish Federation of Metropolitan Detroit, where he was lauded for accomplishments like ably steering the Federation through the Great Recession (Detroit’s economy was hit particularly hard), leading the effort to reimagine young adult engagement for the community, working in collaborative partnership with other agencies and organizations, and more. Scott has been on the board of Leading Edge since 2017.

We asked Scott about leadership, engaging people, and how the Jewish community is changing — but first, we couldn’t resist asking a question based on one thing in his official bio that you don’t see every day in our field…

Your bio says you’re an “aspiring boxer”. What lessons from boxing can you apply to Jewish leadership, and vice versa?

What’s interesting to me is that it’s not a sport I took to easily. Skiing is a sport that I’ve always felt I was naturally good at, and boxing hasn’t been like that at all. But what I’ve found after 200 classes is: if you just do something enough, you can become at least competent. And I think that’s a lesson for me in leadership, where sometimes I’ve avoided things by putting them in the category of, “You’re not good at that, so don’t even try.” Now, you don’t want to overcorrect, because you want to spend most of your time where your strength is, but it’s been affirming to see that you can become at least decent at something just by working at it.

What motivated you to get involved with Leading Edge?

From my entry into this field twelve years ago as a full-time professional, the two issues that kept me up at night most were talent and culture. As I scanned the universe of successful organizations, both for-profit and not-for-profit, it seemed like the great ones had great cultures that attract great talent, which creates more great culture, which attracts even more great talent, in a virtuous cycle of awesomeness.

And I felt that the Jewish communal field just wasn’t putting enough energy into those areas. We didn’t do enough professional development. We didn’t do enough real recruitment. Think about college football — Alabama doesn’t send a graduate assistant to go scout a five-star quarterback and meet with him; the head coach goes there ten times, because getting the right talent is probably the most important thing that coach does. Meanwhile, in our field, we were caught up in the “overhead” model of evaluating effectiveness, keeping our costs down instead of building the best team so we could focus on impact.

So when the conversations around Leading Edge started, I got very excited. I thought, “Yes! This is what I’m talking about.”

How has leadership in the Jewish community been changing over the past decade?

Both professional leaders and lay leaders are much more interested in these issues of leadership and organizational culture than they were ten or fifteen years ago. The lay-professional relationship is improving; people are realizing that professionals aren’t servants and funders aren’t ATMs, it should be a real partnership. And we have a long way to go, but we’re moving in that direction. We also have a lot of work to do around gender and other power dynamics, but those issues are on the agenda now, and that’s important.

I see that among the cadre of new leaders in the field, these issues are more in their wheelhouse than the prior generations. And that makes sense. For many extraordinary leaders in the Jewish communal field from the generation that preceded mine, their galvanizing Jewish experience as a young adult or on campus was the Six Day War. That sense of rallying to be strong in the face of existential threat was what drove them into involvement and leadership. But for the newer leaders, a lot of their formative experiences were something like a Jewish summer camp, or some other magical moment that made them value the experience of community. So they’re a lot more attuned to culture. And that generational difference — it’s not that one of them is better or worse, but the change is real, and it’s making an impact.

What were the biggest challenges you faced when you were a new CEO?

Coming from an entrepreneurial career, where I saw where I wanted to go and then tried to go there as fast as possible, I had to rewire my brain, because in the Jewish communal field there are so many stakeholders that need to be on board for change to happen. People add real value in how we’re going to get there. I had to learn that over time, because it wasn’t innate to me. I had to learn that process matters as much product in this work.

What were the biggest challenges you faced later as a veteran CEO?

Balancing the blocking and tackling of the work, the immediate needs — raising money, getting people services — with the longer-term need to build a vibrant Jewish future. If we ignore the immediate needs, we won’t complete our mission, but if we only focus on the immediate needs, we might lose the future. I tended to get very excited about the new stuff, because it was exciting and energizing, and maybe I erred on the side of focusing on that too much. And it managed to work because I had a great team. But getting that balance right is hard work.

In your tenure at the Detroit Federation, young adult engagement was one of your top priorities. Are there any lessons you learned from that work about engaging people that Jewish organizations can apply to engaging their teams?

For both your internal and external stakeholders, it’s essential that they have “emotional equity” in what you’re doing, a sense of ownership. Occasionally you have to just direct people to do something, and of course you have to stay within the parameters of budget and mission. But within that, when you let the people you’re trying to engage own the initiative, the collective output is way higher. You see people lean in and go the extra mile because it’s theirs. So it’s about empowerment.